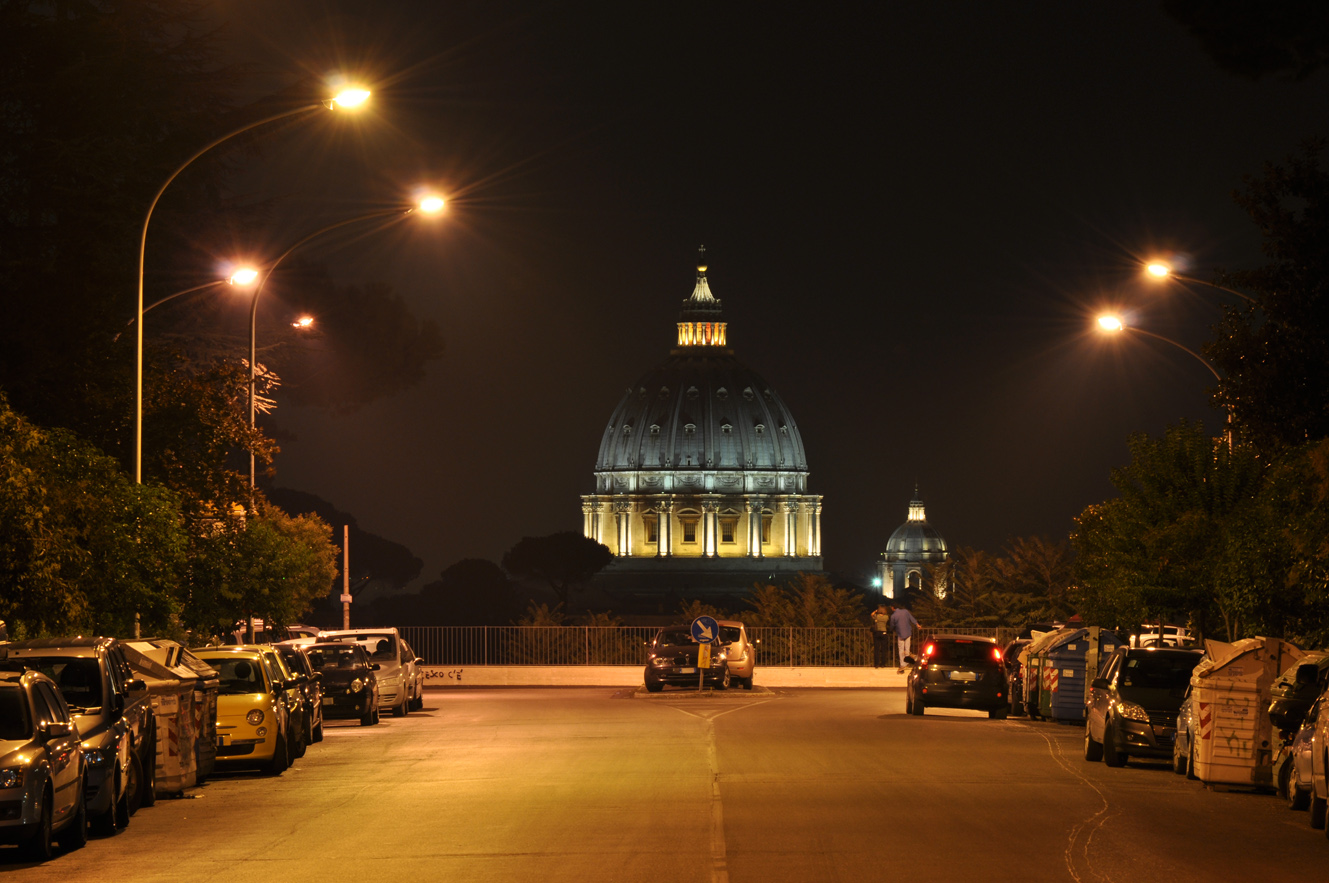 Have you ever thought about visiting the hidden places of Rome beyond the usual monuments, the usual squares and museums? Rome is a city to discover, so here are the 10 hidden places to visit in Rome in 2022:

The Coppedè quarter is a fascinating piece of Rome, out of time and architectural styles, making it one of the 10 hidden places to visit in Rome in 2022. Those who arrive in the Coppedè quarter cannot help but fall in love with the architectural styles of the buildings, streets and squares. The quarter takes its name from its creator (which is not really so), Gino Coppedè, who has fused different styles, so as to create a new and personal one. From Liberty to Roman art, from Renaissance to Gothic art.
The incredible and curious quarter of Rome, has 18 palaces and 27 between palaces and buildings, among the buildings that most distinguish it are to mention the Fairy Villino, the Palace of the Spider and the Fountain of the Frogs. Designed in 1915, the Coppedè quarter of Rome, remains unfinished due to the death of Coppedè in 1927, to then be built by Paolo Emilio André.
We advise you to visit it: you will not regret it absolutely! 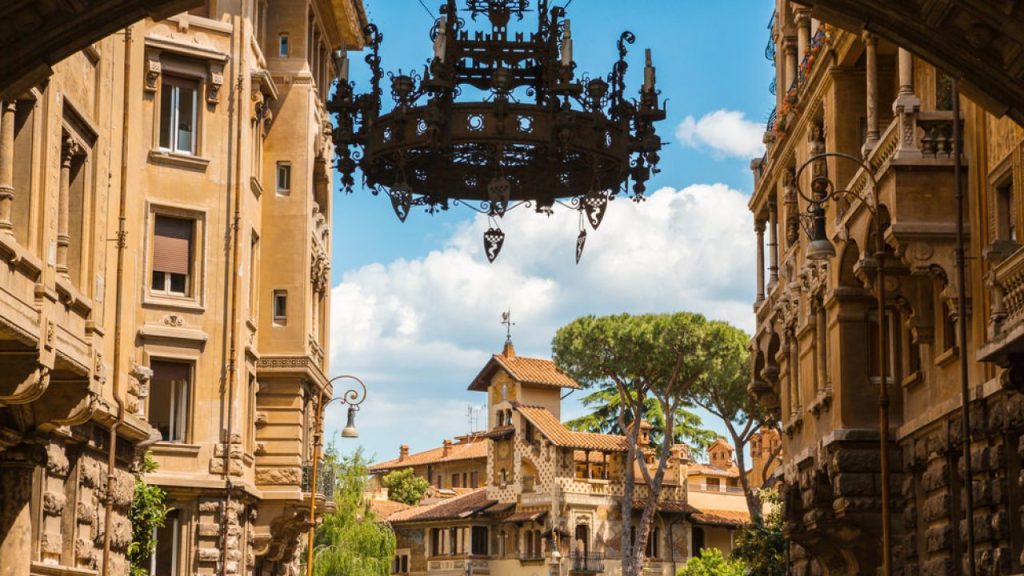 Between Via Marco Minghetti, Vicolo Sciarra and Oratory Square in Rome, there is a pedestrian gallery in Liberty style little known, the Sciarra Gallery. One of the works of the re-unification of Rome at the end of the 19th century, painted by Giuseppe Cellini, his decoration tells the iconographic theme of the “Glorification of the Woman“. A spectacular gallery worthy of being present in our list of the 10 hidden places to visit in Rome in 2022. 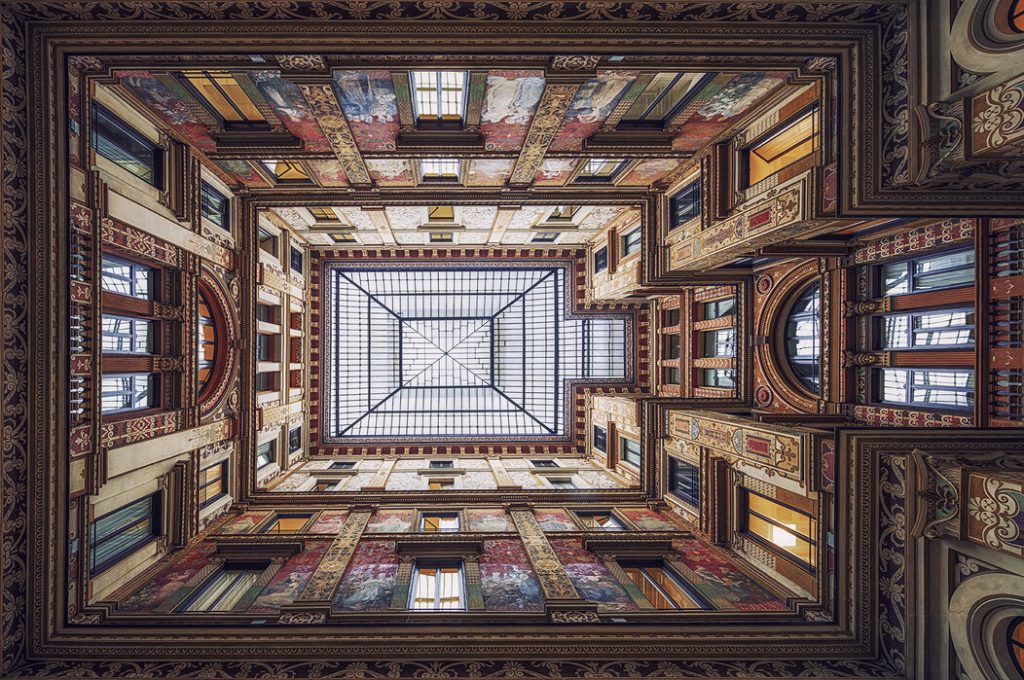 The House of the Owls

In the Nomentano district, inside the green Villa Torlonia, there is a curious building that will transport you to a fairytale place. The House of the Owls has nothing to do with the typical architectural styles of Rome, This is because in 1840 Prince Giovanni Torlonia entrusted the landscape architect Giuseppe Jappelli with the design of a place of escape from the rigid styles of the main residence.
Initially, the result was that of a nineteenth-century “Swiss Hut”, but not completely satisfied, as early as 1908 Giovanni Torlonia Jr ordered to radically transform the building, with the name of “Medieval Village“.
Due to the recurring theme of the owl in the furniture and decorations (a symbol loved by Giovanni Torlonia jr), from 1916 the building changed its name to become the “House of the Owls”. Unfortunately, historical events have not helped its conservation, first the occupation of Anglo-American troops, then the fire of 1991 in addition to theft and frequent acts of vandalism, have made disastrous the conditions. A restoration work that lasted 15 years, from 1992 to 1997, gave new life to what is now known as the House of the Owls. A magical place to see, present in our list of 10 hidden places to visit in Rome in 2022. 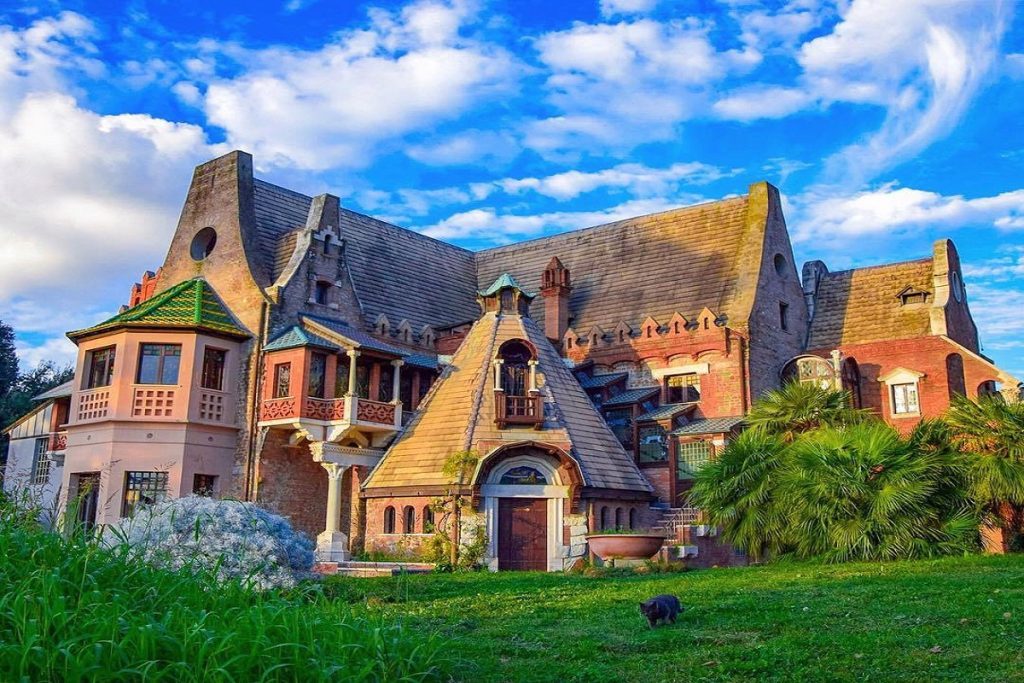 The “Municipal Rose Garden” is located at the Circus Maximus, this romantic garden was established in 1931 and then destroyed during the Second World War. In 1950, however, the municipality decided to recreate it in its current position.
In this magical rose garden, colors and scents triumph with the presence of about 1,100 different species of roses, a place absolutely recommended to visit for its unheard of beauty. In our list of 10 hidden places to visit in Rome in 2022, you can not miss the Municipal Rose Garden, for its extraordinary beauty of the diversity of flora. 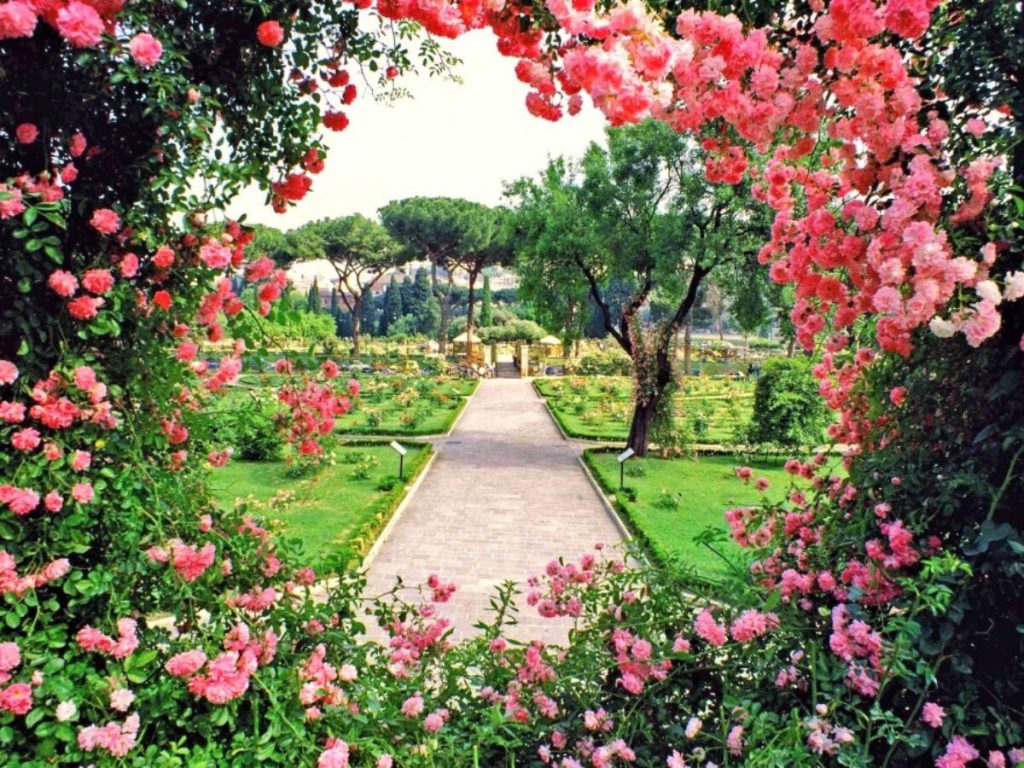 The False Perspective of Borromini

One of the 10 hidden places to visit in Rome in 2022, also filmed by Sorrentino in the great film “The Great Beauty” is the false perspective of Borromini, is hosted in the courtyard of Spada Palace, a place that can upset anyone in his presence. Borromini realized it by perfectly putting into practice all the perspective rules. It is a gallery that seems to be 37 meters long, when instead it is only 8, instead the statue that is at the bottom seems life-sized, is actually 60 cm high.
You will find yourself faced with an illusion due to the fact that the floors converge in a single point of escape, the ceiling gradually drops down as the floor goes up. This curious creation probably means moral deception and the illusion of earthly grandeur. Truly incredible! 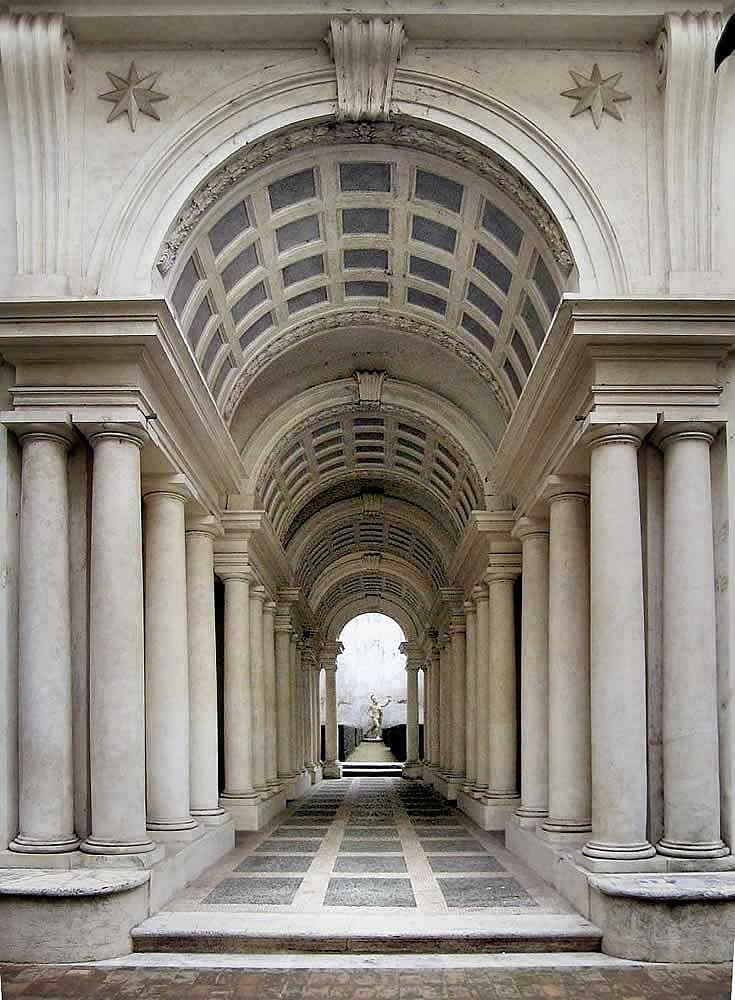 In addition to being a beautiful residential street, Via Piccolomini has a particularity that makes it special and present in the list of 10 hidden places to visit in Rome in 2022. This is not the breathtaking view of St. Peter, but by looking at the dome, you can admire a fantastic optical effect caused by the layout of the buildings.
The further you get away from his sight, the closer it seems and vice versa. Fantastic, right? 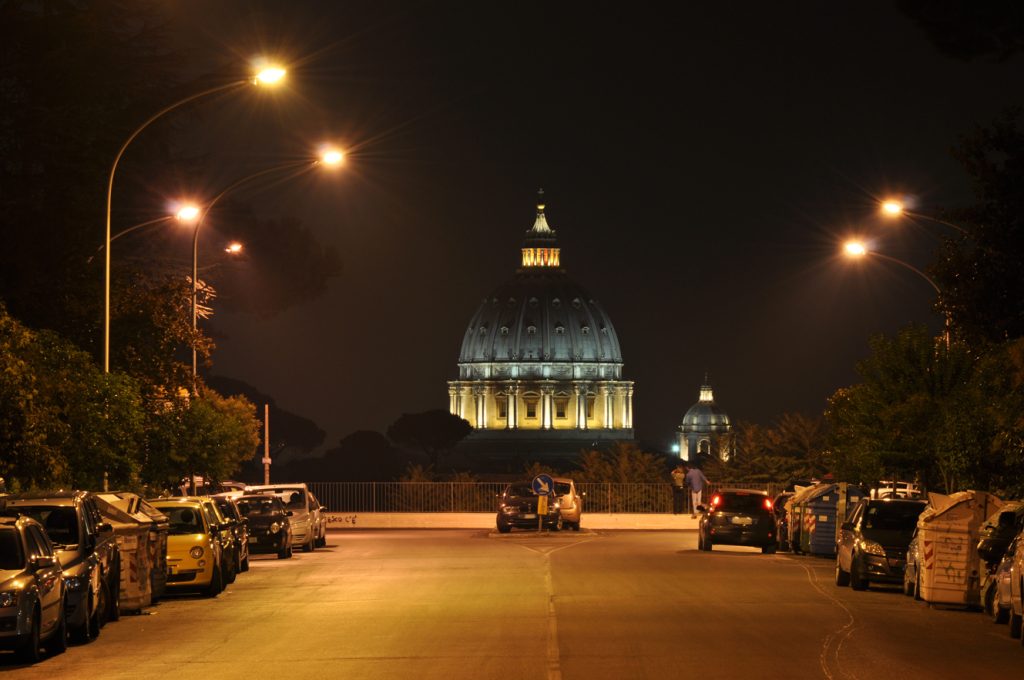 The keyhole of the villa of the Priory of Malta

Did you see the movie “The Great Beauty” by Sorrentino? There is a scene in which you see the Dome of St Peter surrounded by hedges, it is the Villa of the Priory of Malta, in Knights of Malta Square. Putting your eye on the keyhole of the large door in the villa, you can admire a wonderful view of the dome of St. Peter.A place worthy of being present in our list of 10 hidden places to visit in Rome in 2022.
The dome (“Er Cupolone” for the Romans) is in fact perfectly framed by the trees of the Gardens of the Order, an exciting perspective game, to enjoy both day and night. 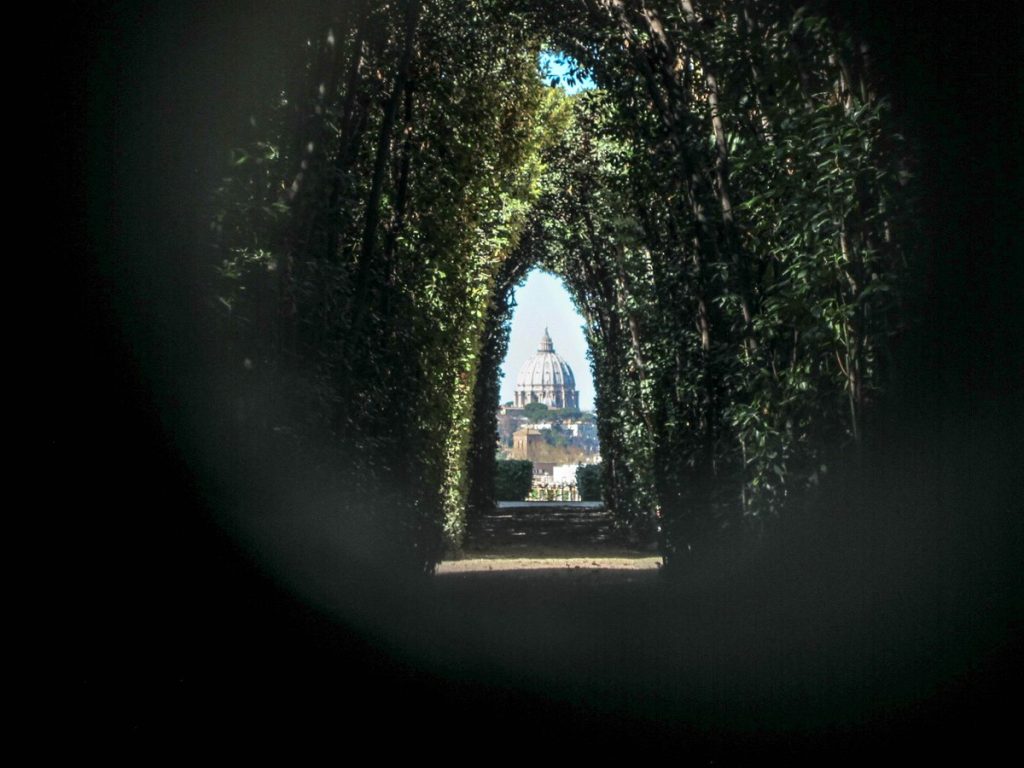 One of the 10 hidden places to visit in Rome in 2022 is “the Holy Staircase“, according to legend corresponds to the staircase of the palace of Pontius Pilate that Jesus went up on the day of his death. This incredible curiosity is located next to the Basilica of San Giovanni in Laterano ( S. Giovanni in Laterano Square, 14) and is kept inside a building dating back to the end of the sixteenth century, built by Pope Sixtus IV. The faithful still walk through it, once a year, in order to obtain a temporary indulgence from their sins. 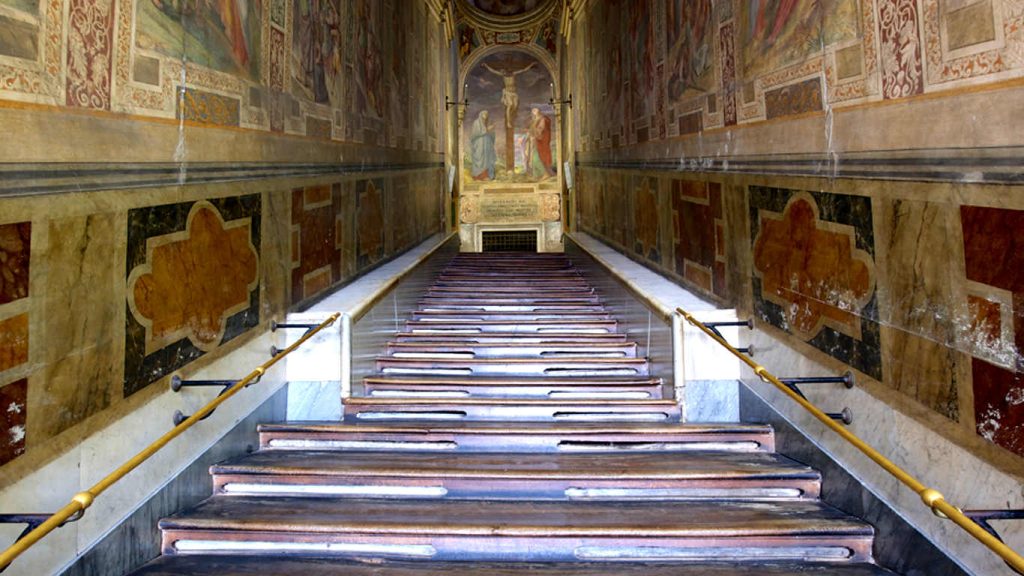 Have you ever seen a palace frescoed with scenes from the masterpieces of Italian literature? At 16 Via Matteo Boiardo, you will find one of the 10 hidden places to visit in Rome in 2022.
The Casino Giustiniani Massimo al Laterano, a structure decorated in 1817 by the Nazarenes on the order of the Marquis Carlo Massimo. The rooms on the ground floor are decorated with epic scenes from the works of Dante, Torquato Tasso and Ludovico Ariosto.
In the project there was another idea, that is, a fourth room that should have hosted frescoes inspired by the works of Petrarch but was never realized. 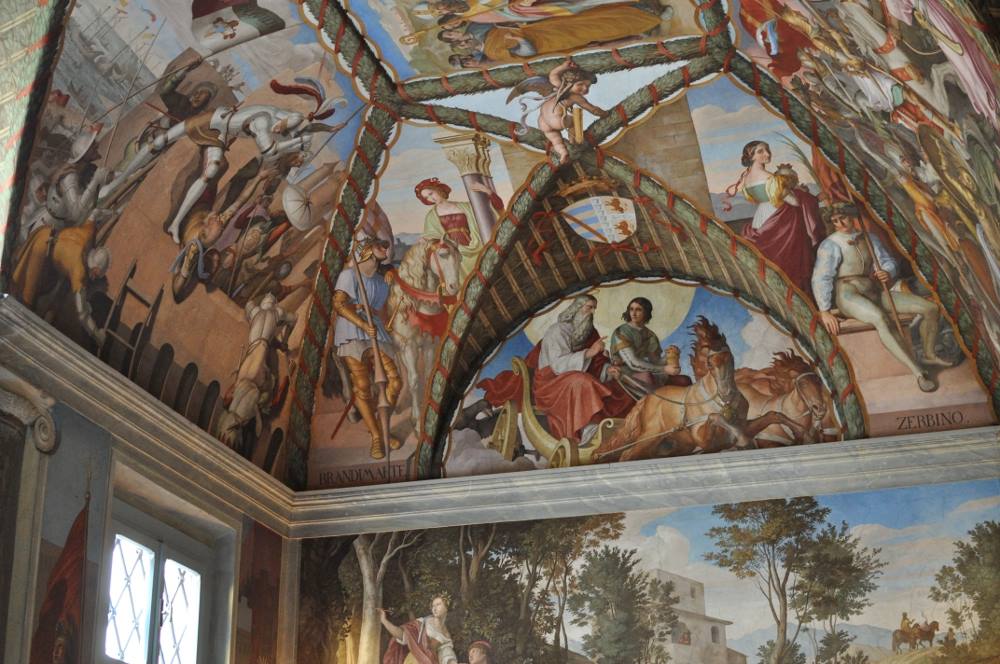 Finally, in the list of the 10 hidden places to visit in Rome in 2022, there are the frescoes by Raphael.
His great works are present not only in the Vatican Museums, but also in the Renaissance Villa Farnesina, located in Via della Lungara in Trastevere. Designed by Baldassarre Peruzzi and commissioned by Agostino Chigi, it is entirely frescoed with paintings by Raffaello Sanzio, Giulio Romano, Sodoma, Giovan Francesco Penni, Giovanni da Udine, Sebastiano del Piombo, drawings by Raffaello. 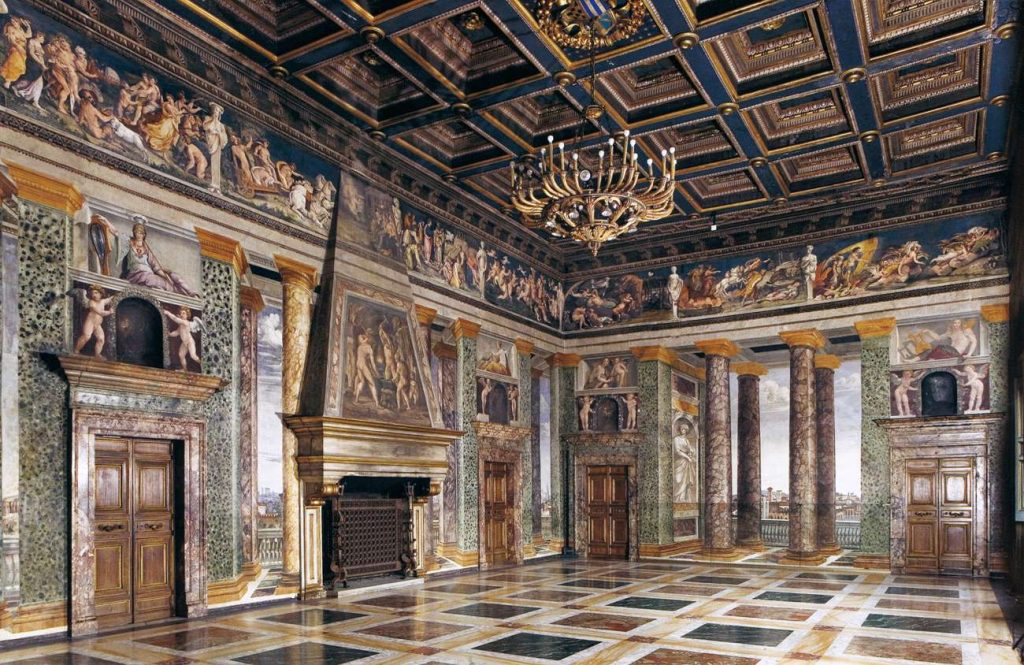 How to get to Rome

Rome is a well-connected city, so you can reach it using public transport or more comfortably by car. If you choose to travel by public transport however, you should also consider the problem of delays, so the visit should be organized with care to optimize travel times. If you choose to reach Rome by car, travel with us: private transfers NaplesNCC will take you where you want, with flexible hours and a professional driver at your disposal. If instead you have to reach any other place like the Amalfi Coast and maybe make a stop in Pompeii, discover the services offered by Shore Excursion – Tours & Experiences: we can also organize for you a private tour of the excavations of Pompeii of about two hours.
Contact us and we define together the best solution for your needs.